Which canon Vlogging camera is suitable for Vlogging

This article picks up the Canon cameras suitable for Vlogging and compares their features and price to help you decide on what’s best for your Vlogging needs.

For the uninitiated too, this could be your opportunity to familiarize yourself with Vlogging and the basic requirements for Vlogging.

The most recommended video cameras for Vlogging on YouTube are the Canon Vlogging Cameras.  As for the editing software, FilmoraGo can help you with the most engaging output and is very simple and easy to use.

Let’s get you started…

Part1. What type of Canon Camera do YouTubers use for Vlogging?

The YouTubers who are into Vlogging prefer the PowerShot G7 X Mark III.

There are many reasons why this Canon camera is a preferred choice.

It is compact enough to fit into the pocket.  Also, its on-screen options are intuitively named. Yes, by far it is the easiest camera to use for Vlogging.  Let’s now consider some serious features that contribute to a great video for streaming on Vlogging.

1.    Canon PowerShot G7 X Mark III supports the 4k video format, It has an inbuilt microphone like the Mark II but also has a microphone jack that lets you connect an external microphone in case you need better noise filters for your live recording. (This feature was absent in Mark II. )

2.    It has the exposure ability to shoot clear streaming videos indoors as well as outdoors, day as well as night! If you were worried about night shots, you needn’t be!

3.    The Canon PowerShot G7 X Mark III has very good image stability that makes it ideal for Vlogging if you are shooting outdoors and are on the move. (You still could consider a tripod for the camera. Not for the purpose of non-jerky videos but for getting a wider angle to cover more in the shot. )

4.    It can shoot at 120 fps which enables capturing images in slow motion as well.

5.    The PowerShot G7 X Mark III has an inbuilt WI-FI that enables your creativity to be uploaded to YouTube instantaneously through the Live Streaming function. 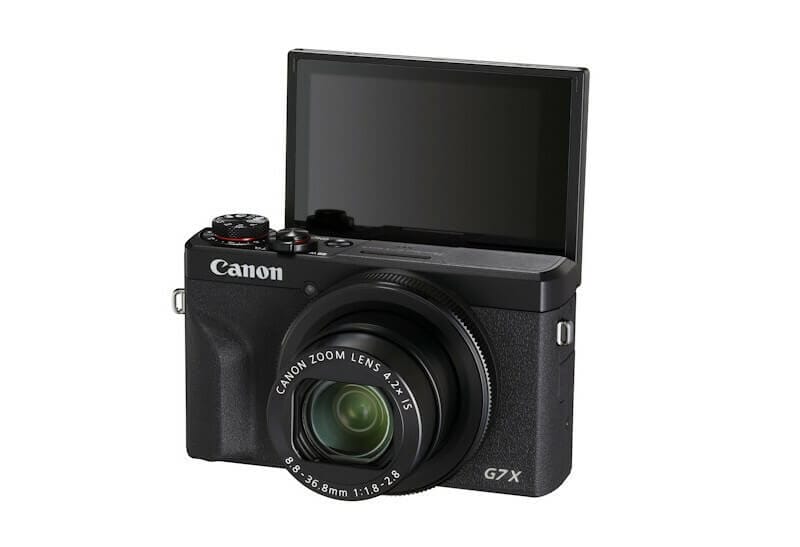 Some features of the Canon PowerShot G7 X Mark III are listed below to help you compare, just in case:

You may also like: How to Make a GRWM Video on iPhone

Part2. What is the difference between the models of Canon cameras?

Why the Canon PowerShot G7x?

Well, apart from the fact that it is the most tried, tested and recommended Camera for Vlogging by YouTubers, here are some more good considerations.

The three most popular Canon cameras used for Vlogging are the Canon PowerShot G7x, the Conon EOS M50 and the Canon EOS 250D.

The Canon PowerShot G7x is by far the most convenient for Vlogging on YouTube when comparing some practical, technical and economic aspects for choosing the G7x.

Read on to see why…

If you are onto Vlogging and want a camera that is easily portable, gives you decent imaging, has an inbuilt-microphone and Wi-Fi, has a tilting screen, better image stability than the most average Vlogging cameras out there, and gives you streaming videos in the 4k format, then that’s your camera for Vlogging and that’s Canon PowerShot G7x.

Considering the price and the features as well as abilities, it is a better buy than the M50 and the 250D for your streaming videos.

The M50 and the 250D are not as compact as the G7x, they cannot give you good continuous shooting ability and also give you the same 4k streaming video as the G7x, then why pay more?

Conclusively, now that we know what we need for Vlogging and the different cameras available for Vlogging, do you agree that the Canon PowerShot G7x is the best buy for your Vlogging needs on YouTube?

That leaves us with the last bit needed to make your streaming videos look good so that it fetches you a good number of fans on YouTube - The editing software; Install the FilmoraGo app

It is the best video editing software for your Canon Vlogging camera.

Here is a link to download the FilmoraGo and a step-by-step tutorial to make your editing job easy and simple.